Aldous Huxley was another of OTTOLINE'S- Men. No particular Facts are known or Rumour implied about the pair-however it is well known that the two had a mutual admiration for each other. Huxley sat out the first war at Ottoline's home-Garsington.
Published in 1921, Crome Yellow tells the Story of the country house-Crome. Crome wouldn't be of great import to Us-however it mirrors in many details Ottoline's beloved Garsington -though at the moment in Our OTTOLINE STORY-we have yet to step Over that threshold. 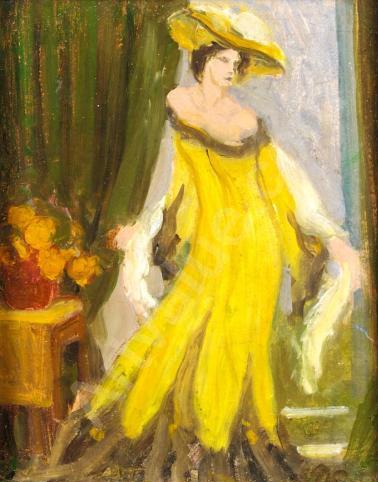 As I've just read CROME YELLOW, so I thought it would be time to share a few things about this Huxley novel. It is his first-take heart novelists-Huxley improved with the length of a few years. Crome mostly interests me for the descriptions Huxley gives Us of the fictional CROME-Garsington- & OUT OTT!

from the novel:
There was a long gallery, with its rows of respectable & ...rather boring Italian primitives, its Chinese sculptures, its unobtrusive,dateless furniture. There was the panelled drawing-room, where the huge chintz-covered arm-chairs stood, oases of comfort among the austere flesh-mortifying antiques. There was the morning-room, with its pale lemon walls,its painted Venetian chairs and rococo tables, its mirrors, its modern pictures. There was the library, cool, spacious, and dark, book-lined from floor to ceiling, rich in portentous folios. There was the dining-room, solidly, portwinily English, with, its great mahogany table, its eighteenth-century chairs and sideboard, its eighteenth-century pictures-family portraits, meticulous animal paintings.


All the Beds were ancient hereditary pieces of furniture. Huge beds, like four-masted ships, with furled sails of shining coloured stuff. Beds carved and inlaid, beds painted and gilded. Beds of walnut and oak, of rare exotic woods. Beds of every date and fashion... all of them grandiose, magnificent.

Priscilla Wimbush was lying on the sofa. A blotting-pad rested on her knees and she was thoughtfully sucking the end of a silver pencil...
Mrs. Wimbush laughed. Her voice, her laughter, were deep and masculine. Everything about her was manly. She had a large, square, middle-aged face, with a massive projecting nose and little greenish eyes, the whole surmounted by a lofty and elaborate coiffure of a curiously improbably shade of orange...
Today she was wearing a purple silk dress with a high collar and a row of pearls. The costume, so richly dowagerish, so suggestive of the Royal Family, made her look more than ever like something on the Halls. 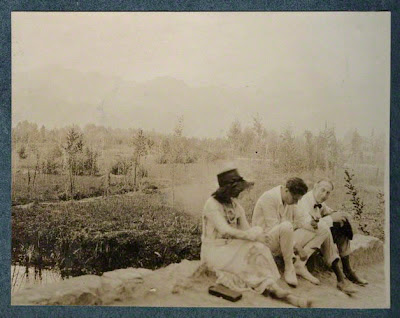 
Said PEARLS, "also it was there that she bought for me a row of pearls at the sale of the French crown jewels; she liked to feel that I should wear a row of pearls that had been round the neck of Marie Antoinette."

Priscilla was looking through a pile of  drawings. One by one she held them out at arm's length and, throwing back her mountainous orange head, looked long and attentively through   half-closed eyelids. She wore a pale sea-green dress; on the slope of her mauve-powdered decolletage diamonds twinkled. An immensely long cigarette-holder projected at an angle from her face. Diamonds were embedded in her high-piled coiffure; they glittered every time she moved. 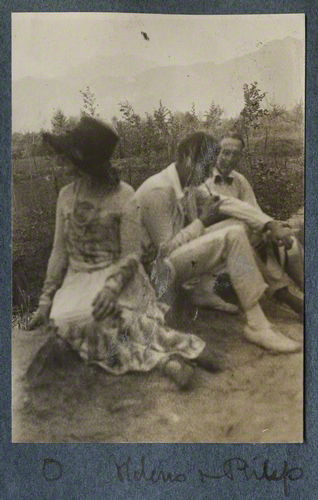 all these photographs come from Ottoline's collection of scrapbooks-at the NPG, here.